What Are Timing Belt Pulleys?

Timing belt pulleys are a wheel on a shaft or an axle. It is developed in order to support the change of direction and movement of a belt or a cable along the circumference.  Pulley is grooved in between two flanges all over its circumference. Toothed belts and pulleys are of major importance in synchronous drives based on flexible components.Their curvilinear tooth profile was designed with high-speed and provide excellent registration without a loss in torque carrying capability making them ideal for precise registration applications and heavy loads. Timing belt drives are increasingly replacing inefficientroller chain sprockets for the transfer of power from shaft to shaft, torque multiplication, speed reduction, speed increase, and shaft synchronization.

What are the advantages of timing belt pulleys?

The Application of Timing Belt Pulleys

Timing belt pulleys are applied in many ways such as using forces, lifting loads, and transmitting power. The two main reasons to use a timing belt and pulley system are for power transmission in which a motor drives the pulley system or conveyance in which parts are moved along or with a belt.

In the packaging industry, they are used commonly in bagging machines. You may see them utilized in the sealer part of the machine. A pulley and belt system allows for the sealer to come down on top of the bag by sliding along the belt, a conveyance type of application. To continue with conveyance, long timing belts with attachments are typically used for workplaces to move along the belts or as separators. For example, the simultaneous conveyance is applications in which workpieces move at regular intervals on the belts.

Light load parts can be placed on belt attachments for vertical conveyance applications.

Circuit board conveyance typically uses two timing belts to transfer the board a long distance. For accumulation conveyance, using a cloth-lined belt is recommended to reduce friction.

Tractor conveyance is an application in which parts are sandwiched between belts.

The most popular and familiar use of timing belts and pulley systems are applications for power transmission. A simple application would be two pulleys and one belt system. Your driver pulley which is connected to your motor transfer the power via the timing belt to the other pulley-the driven pulley. There are more complicated power transmission applications, for example, the power steering in an engine utilizes different sizes of pulleys and belts. Depending on your application specifications, a variety of sizes, lengths, bore, and profile types can be chosen to create your system.

Recca Machinery is professional timing belt pulleys manufacture and supplier in China. We’ve started timing belt pulleys production since the year 2006 and always met the rising demand of its customers. The standard timing pulleys are supplied with a small prebore so that they can be machined according to customers’ demand. Besides, taper bore is available. All Recca Pulleys can be made of special materials, with heat and surface treatments according to customer specifications. Here following are all the different types of timing belt pulleys can be supplied by us:

What Pitches Can We Supply?

◆ Plastic bags/kraft paper+cartons for light weight; Wooden case for heavy weight
◆ According to the customers ‘ demand

Toothed pulleys are coded on the basis of:
– the number of teeth
– pitch, expressed by one or more letters
– width, expressed in hundredths of an inch
– flange ( if any ) expressed by the letter F.

Pulley Drawings Symbols
N = Number of pitch lengths or teeth on a pulley
P = Pitch is the distance between the axes of two adjacent teeth irrespective of whether these teeth are on the pulley or
the belt provided that measurement is taken on the circumferenceor pitch line
t = Belt thickness
Dp = The diameter of the pulley pitch is obtained from formula Dp = (P · N)/P
De = External diameter of pulley De=Dp – NF
Df = Flange diameter
d = Bore diameter
Dm = Hub diameter
F = Tooth width
L = Total length incl. Hub

This treatment is carried out on steel pulleys mostly for appearance. The resulting black iron oxide coating will not chip, peel, flake or rub off. A chemical degreasing pretreatment (pickling) is made before black oxiding and causes the deoxidation of the
pulleys. After black finishing, pulleys are oiled in order to protect surface from atmospheric oxidation. This treatment therefore will merely produce a black finish coating but it is not a corrosion-resistant treatment. To achieve a level of corrosion resistance, oil is applied on the pulleys.

This treatment is made on cast iron pulleys in order to obtain a good antioxidizing protection,
without modifying dimensionally the profiles and forms of the treated parts.The phosphating process, that produces on the surfaces of pieces a thin microcrystalline deposit with a basis of manganese and iron phosphates, is completed by an impregnation in protective oils that improves the resistance to the oxidizing agents of the microcrystalline coat itself. In addition to this, the phosphating gives, to the treated parts, a pleasant aeshetic appearance, due to the blackgray colour produced on their surface. 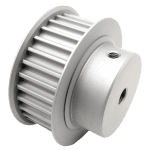 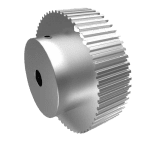 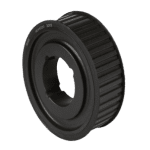 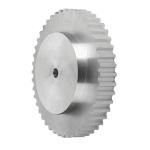 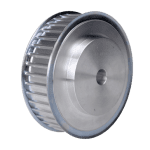 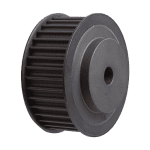 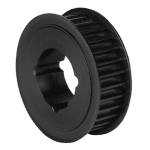 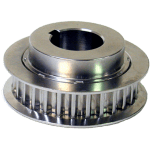